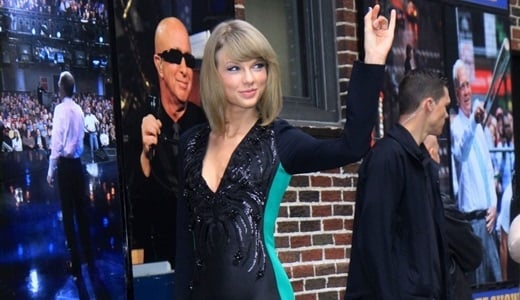 As if Taylor Swift exposing her boney chest plate and gangly bird legs wasn’t bad enough, she also just had to flaunt her allegiance to the Dark Lord while going to make an appearance on the crotchety Christ killer David Letterman’s “Late Show”.

Of course Taylor Swift pandering to the Devil, Jews, and degenerates comes as no surprise, as she is about to release her new album and she will stop at nothing to see that it is a success. Unfortunately for Taylor it won’t matter how many albums she sells, for she has now sold her soul so many times that a special place deep in the hottest ring of the eternal hellfire has been reserved just for her. Let us pray that Allah sees fit to smite her and her awkward body down there soon, so that we may no longer suffer hearing her awful and annoyingly catchy music.