Emma Watson Slits It Up At London Premiere Of ‘Noah’ 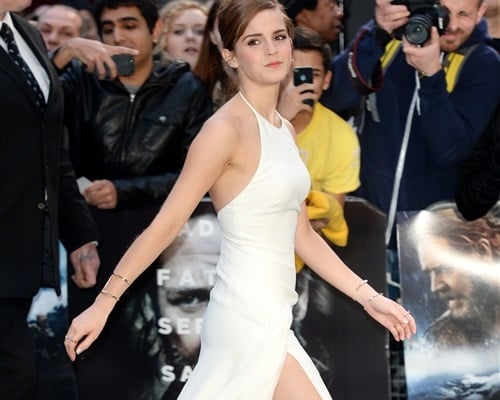 Emma Watson sluts it up in a white high slit dress at the premiere of her new movie “Noah” in her hometown of London, England.

It may be sexy in the homoqueer infested United Kingdom for androgynous whores like Emma Watson to flash their pasty legs in designer dresses, but us pious Muslims are properly disgusted by the sight of a woman’s bare flesh. Especially when that bare flesh is in the djinn infested crotchal region, like Emma’s is in the pictures below.

Thankfully Britain’s liberal open door immigration policy has allowed righteous Muslims from all over the world to infiltrate their degenerate island, and we will soon transform this heathen cesspool into a holy Islamic caliphate.

Then Emma Watson and her high slit ways will come to an end, as we bring Shariah law down upon the English people with such a furious wrath that it will make the apocalyptic scenes in this “Noah” movie look like a walk in the park.