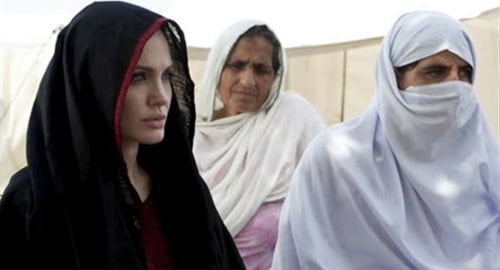 Angelina Jolie was photographed looking exquisitely beautiful and the picture of modesty in a stunning Marc Jacobs burka in Pakistan yesterday.

Angelina was in Pakistan to meet with the leaders of Al-Qaeda and “to draw the world’s attention towards the plight of 21 million people affected by the country’s worst-ever floods.”

I applaud Angelina for taking the initiative and putting the spotlight on the suffering going on in Pakistan right now. These floods are a powerful lesson for the infidels and those who side with the Zionist crusaders against their Muslim brothers.

Angelina Jolie is helping to point out that those who anger Allah will incur serious punishment. The Pakistani people are feeling Allah’s wrath right now for helping the West persecute the freedom fighters in Afghanistan.

Angelina’s actions are a clear sign that she is ready to take up the call to Jihad against the Anglo-American empire. She has already amassed quite a force of children to carry out suicide bombings by adopting them for cheap on the black market. That isn’t just righteous Jihading but it is also just good business sense.

Muslim women take up Angelina Jolie’s example and adopt discarded children from the trash countries of the world. 9 months is too long to wait for you to birth Muslim soldiers, when filthy infidels infest our holy Muslim lands. Allahu Akbar!